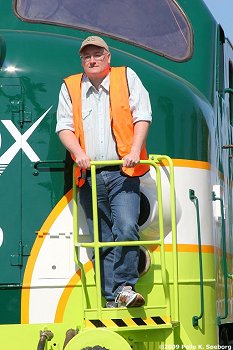 Carsten Stjernholm Lundsten is my full name. Danish guy, born in 1967, living south of Copenhagen and married to Dorthe Atkins.

As this web-site makes no secret, my main hobby is railroads and trains, and it was only natural to make it my living as well. For some strange reason I'm deeply interested in signaling and safety concepts and associated operational principles, so that became my place to start in the business.

My personal railroad hobby is mostly aimed at North American railroads, particularly the former Atchison, Topeka and Santa Fe Railway and the railroads of the steel region around Pittsburgh. The hobby part of the signaling and safety thing is also heavily influenced by North American practices - a very inspiring contrast to traditional European thinking.

Over the years my interest in North American railroads has included shortlines and regional railroads. The North American railroading practices serve as an inspiration in simplicity and represent an art of cheap and simple railroad operations that has been forgotten (and since made impossible by overregulation) here in Europe. Unfortunately preventing a big segment of a European rail freight market to ever re-develop.

Besides (or often in combination with) my hobby of railroading, photography is also a hobby of mine. I occasionally abuse the guitar and once upon a time also used to go fishing.

From an educational point of view I'm a M.Sc. in Electrical Engineering, graduated from The Technical University of Denmark in 1991. I specialized in computer architecture and digital systems design. But shortly after my graduation I decided to "go play with trains" instead, and so I joined EB Signal in Denmark. My employment there gave me a strong practical experience in validation, development and design of electronic interlocking systems. Later I had the opportunity to gain international knowledge by working as the technical "railroad wizzard" for the international CTC sales department. EB Signal became ABB Signal and later Adtranz Signal and eventually it became time to seek new challenges.

In 1998 I joined RAMBØLL, a major Danish company of consulting engineers. Rambøll was at the time building a team of signal experts, which was expanded over the years. My years at Rambøll included a 1-year stay in the US, Pittsburgh PA more precisely, and a lot of different projects for many clients. Some challenging, some odd, some plain fun and some boring - as life goes. The projects ranged from very technical signaling design to operational analyses.

In 2007 it so happened that I got involved in buying a couple of diesel locomotives and starting a locomotive leasing company, BLDX A/S. Everyone around me felt this was an appropriate way for me to celebrate my midlife crisis(!) - I mean, what else do you do when you're a railfan, don't like motorcycles or sports cars and don't have a wife to divorse? I met Dorthe a few years later, and fortunately she embraced me as well as my cat and the locomotives! BLDX A/S is a part time business for me, and I serve as the managing director of the company. Rambøll was a good sport about this and allowed me to reduce hours there to allocate time for BLDX.

In 2008 Adtranz had become Bombardier Transportation and they asked me if I was interested to come back. Since I felt it was time for a change we negotiated an agreement that allowed for BLDX and I was back at the old hunting grounds. A somewhat strange mix of new and of deja vu, but it's been positive and fun.

In 2010 my other activities became too difficult to combine with even a parttime job at Bombardier, and I became a self employed (mainly signaling) consultant under the name of C. Lundsten ApS. I do consulting for infrastructure owners, suppliers and railway undertakings, independently or in cooperation with other consulting companies.